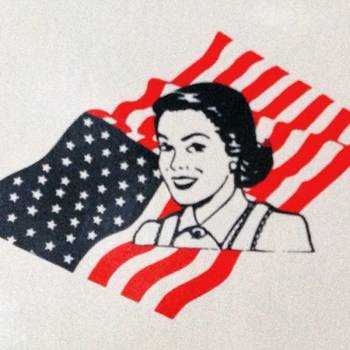 A few decades have passed since the reversion of Okinawa to Japan, but there are still US military bases and a strong image of America here. 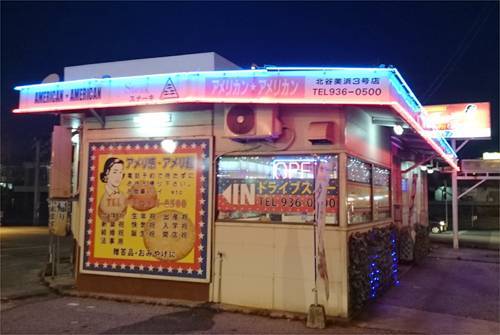 And this is probably why
There is an American style restaurant called American American. 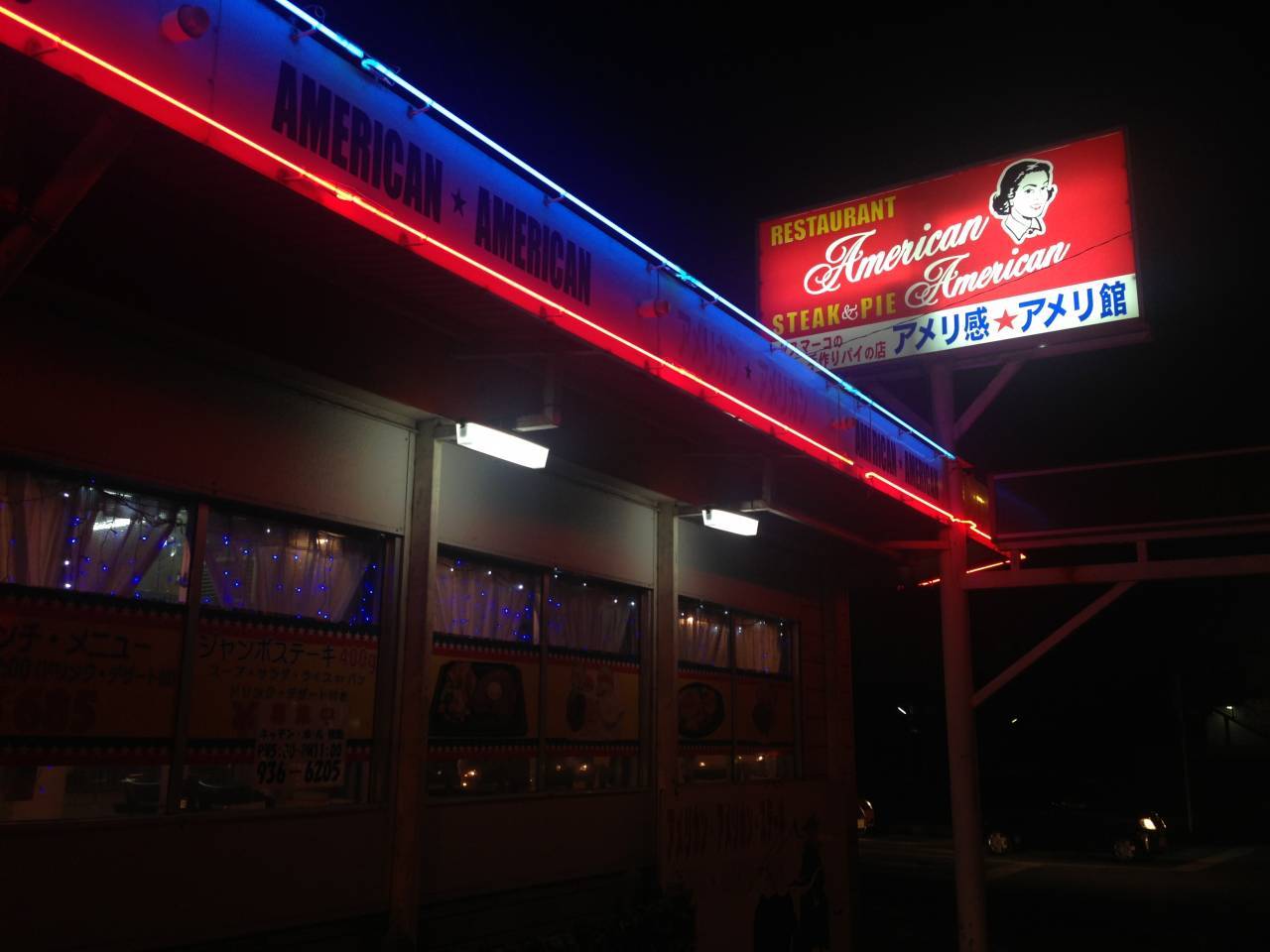 We went to the Mihama branch (third shop), one of the 3 shops in Chatan, Uruma, and Mihama.
Just a few minutes’ drive from the American Village in Mihama.
We were led by the neon lights on Route 58. 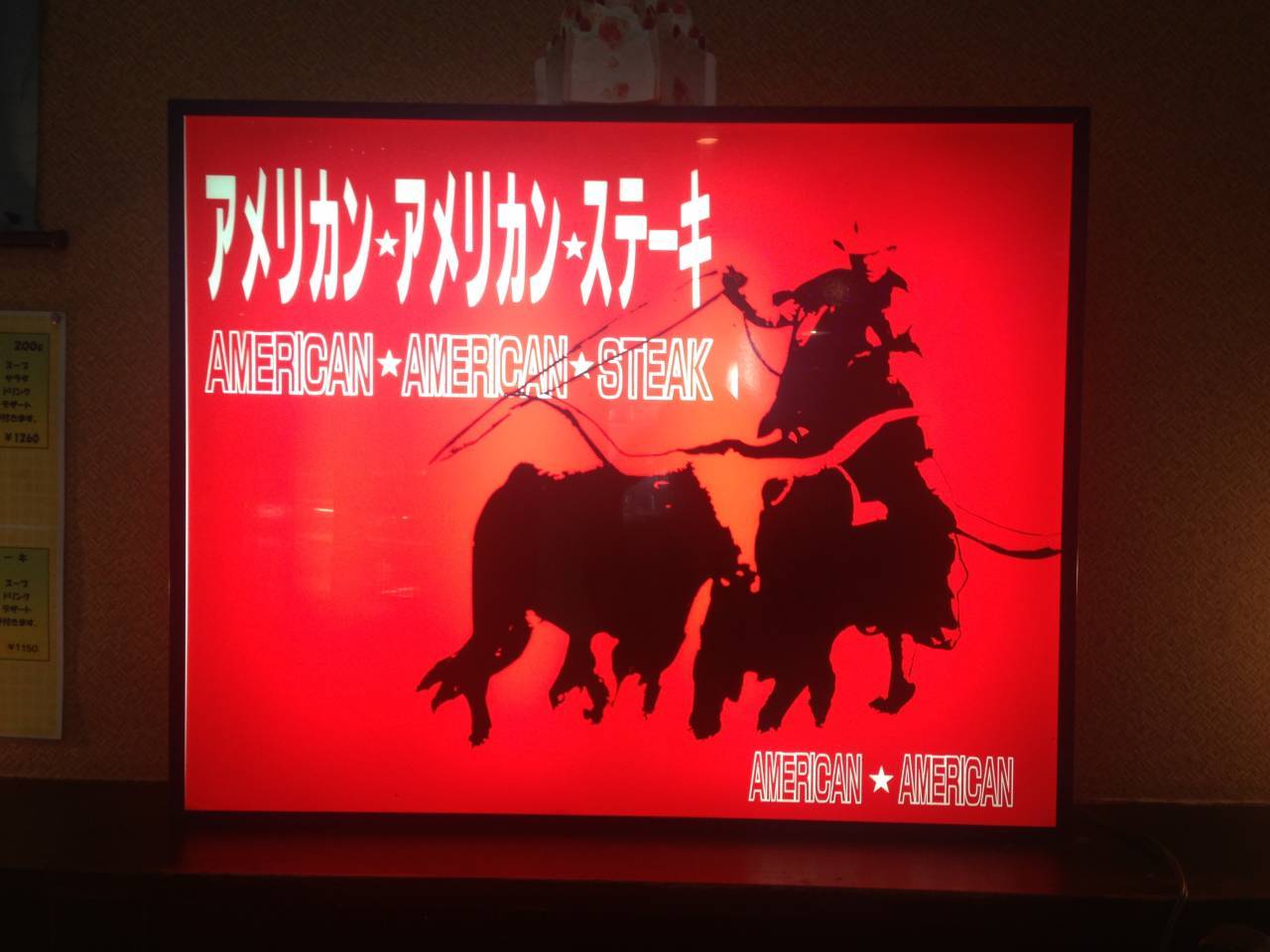 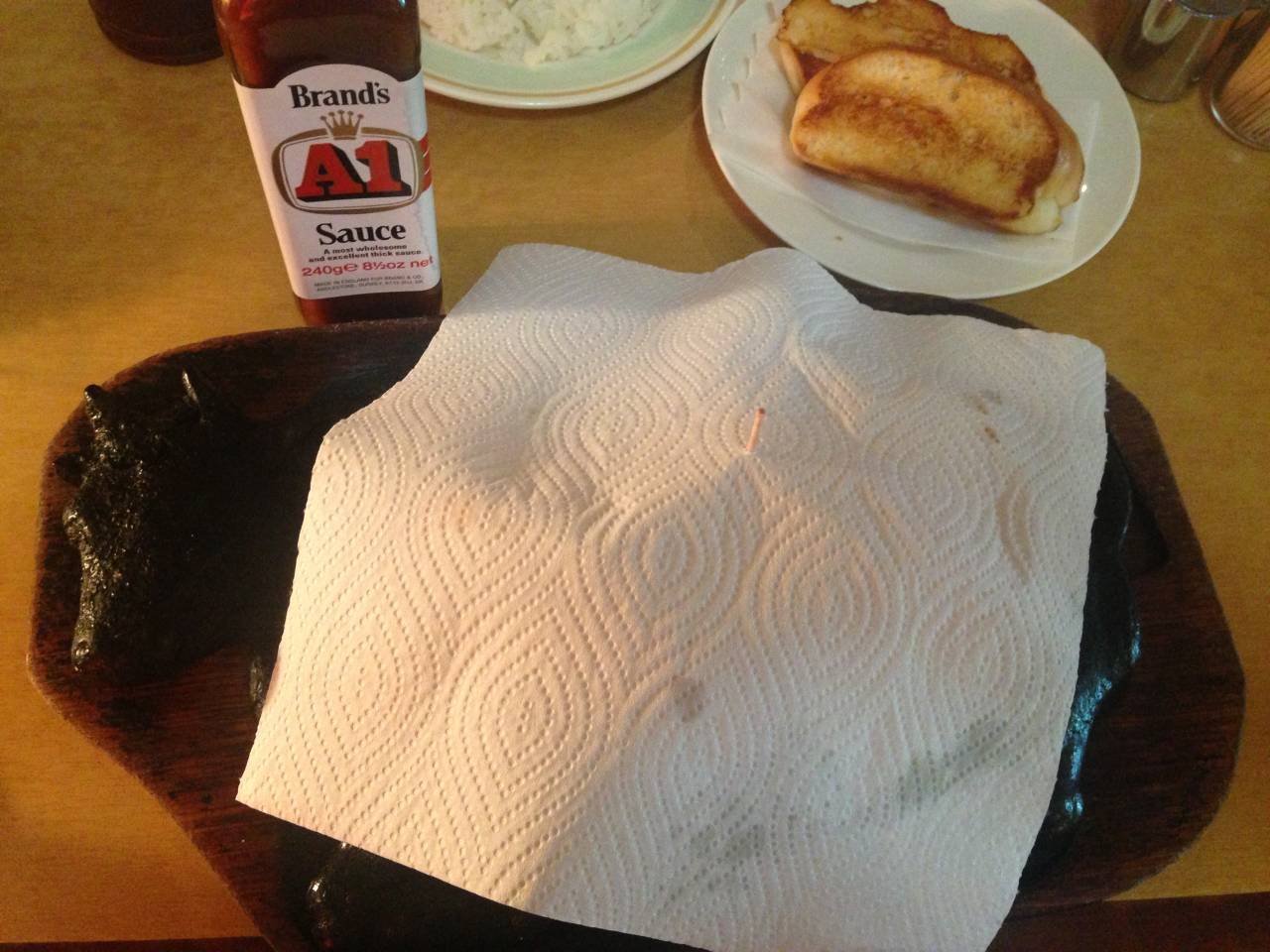 There are a variety of items on the menu.
There is even a Japanese style set meal (not American!). We ordered the Texas steak set.
Over the steak meat was paper towel covering it as if there was something expensive under it.
It’s the restaurant’s thoughtfulness to prevent oil splatters on your clothes! This is so Japanese.
The bread that came with the steak was greater than I had expected but the rice looks good too. This is also very Japanese. 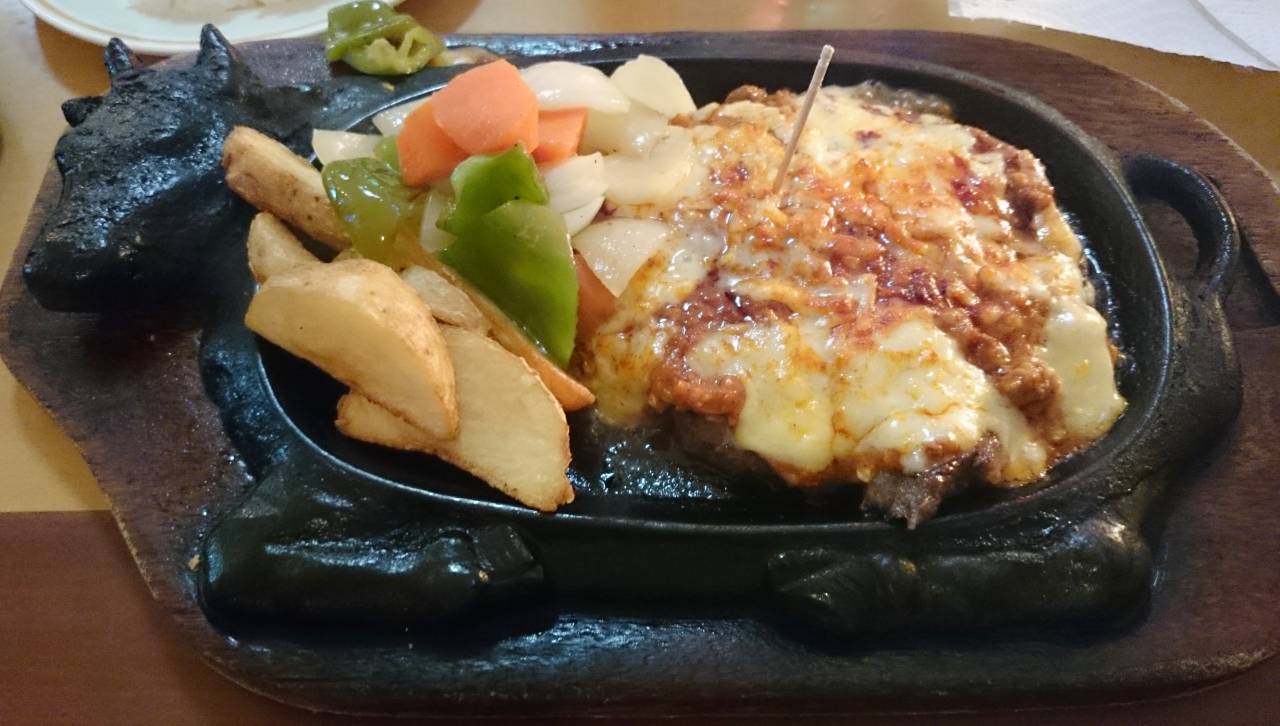 I removed the paper towel and underneath it was sizzling meat on a metal griddle in the shape of a cow! Cheese! Potatoes!
“I can’t eat all this.” was what I said in a girly voice, but I emptied my plate, to my surprise.

Leftovers can be taken home if you can’t finish everything on the plate.
It was far from Japanese-style tender meat, but even then, I was filled with satisfaction from the chewy texture. 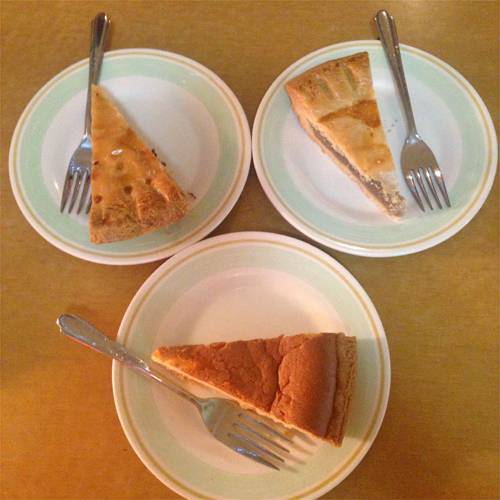 The set included cake (pie?).
Blueberry, cheese, and taimo (taro potato).
※The type of cake included in the set cannot be selected so it will be a surprise what you will be served. 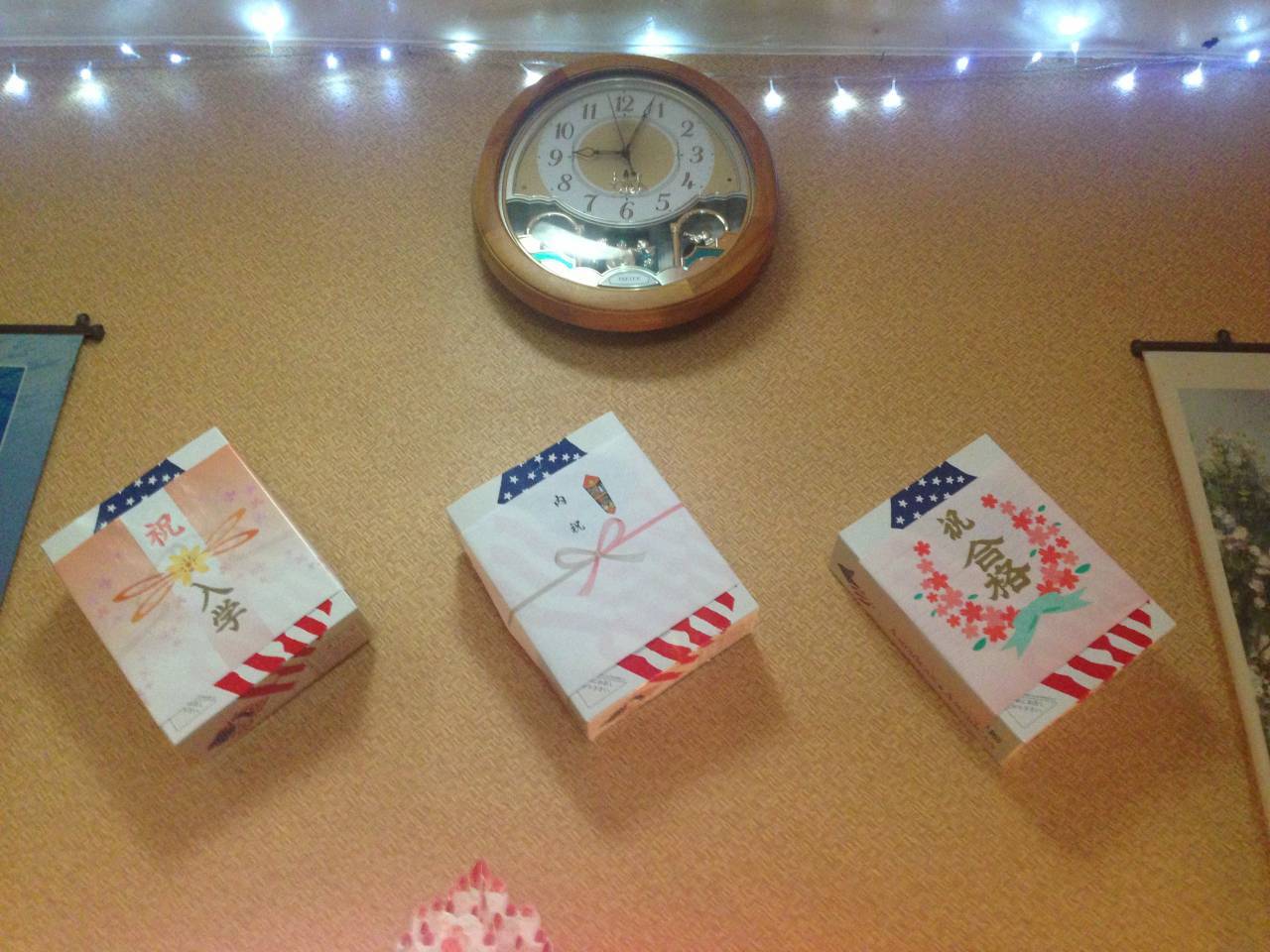 We saw boxes with noshi posted on the wall.
(*noshi=strip of paper attached to gifts to express good fortune)
Baked goods seem to be a popular gift.
I witnessed a customer, most probably a local, buying 8 boxes! 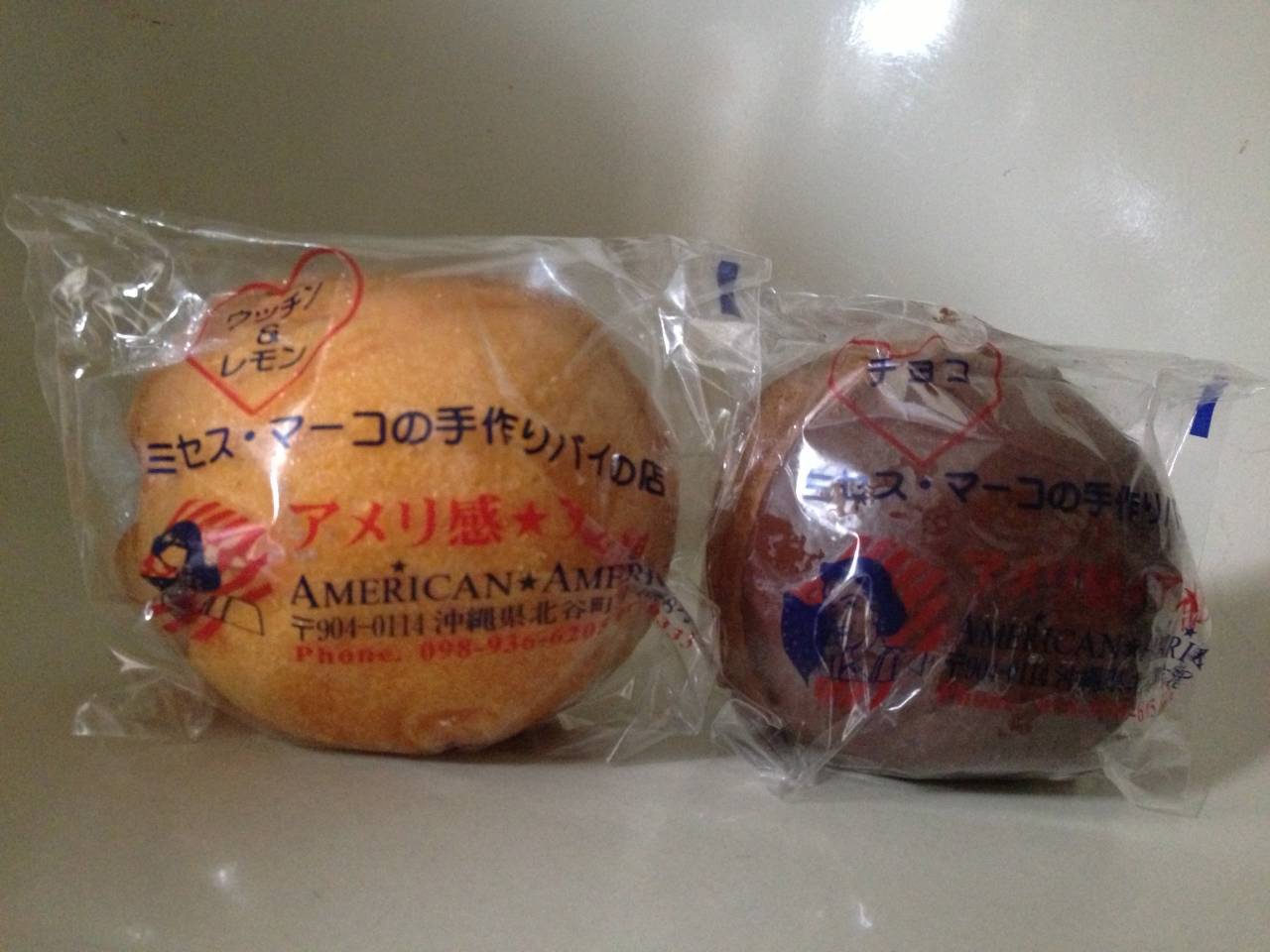 These are the content of the box.
Soft baked cake.
Different flavors like lemon, chocolate, and ucchin and lemon flavor
ucchin…apparently turmeric in the local dialect 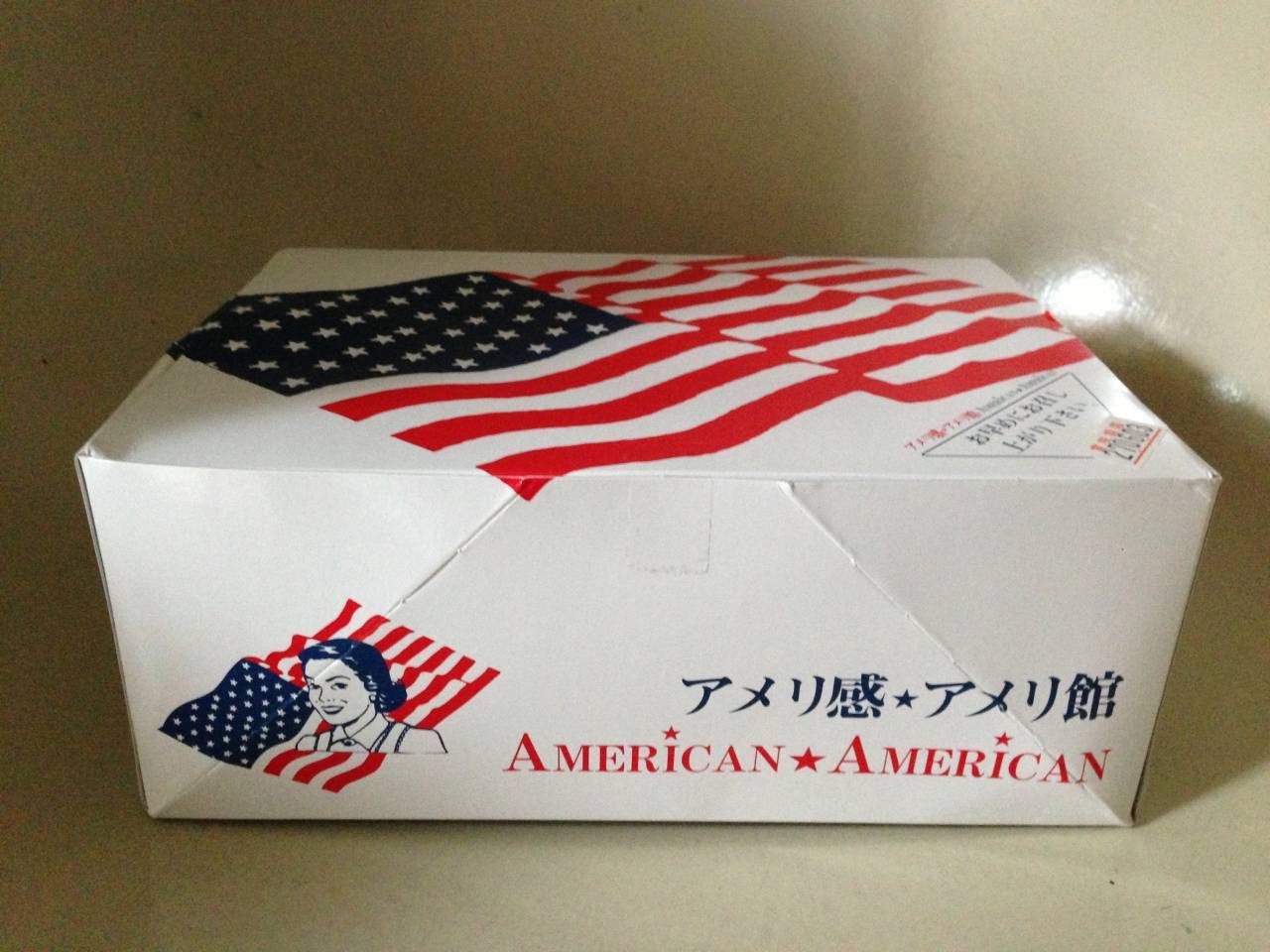 I fell in love with the box♡ so I bought some baked goods to take home.
It was bent during our flight back, but I’m glad I got it. 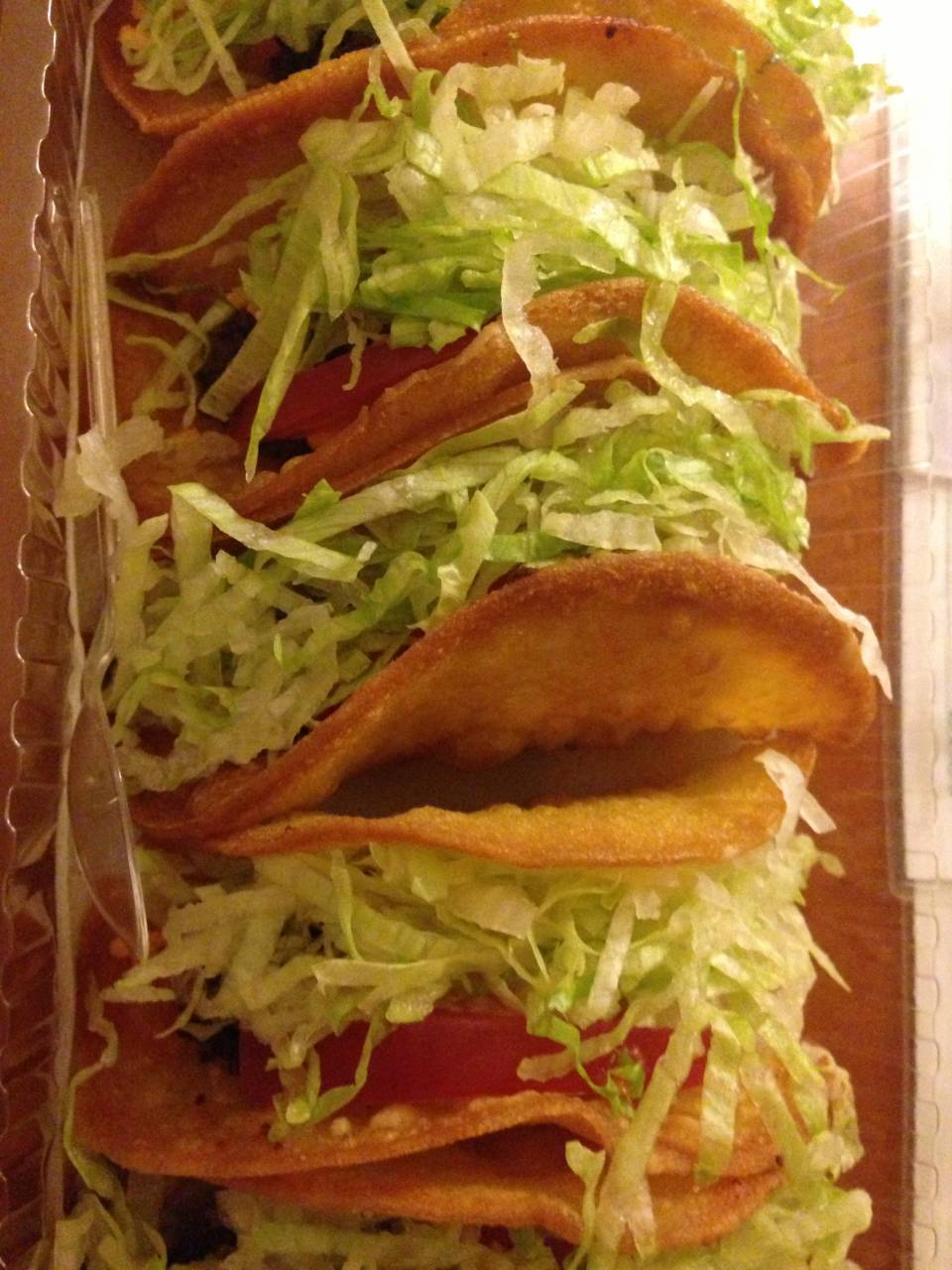 These are the tacos that I took out.
Getting all excited, we ate these tacos the evening we bought them.
It wasn’t anything new to us, but somehow we got so hyper with the stores and food here.

Here’s my personal opinion…
I’ve been to a few countrysides in the US but couldn’t find local restaurants. (Major big name restaurant chains seemed to dominate the areas.)
This restaurant was exactly what I was searching for at that time—American food of the good old times.
I have to go back again!
Next time I go, I’m going to the main restaurant where they say we can meet the owner Mrs. Maako. 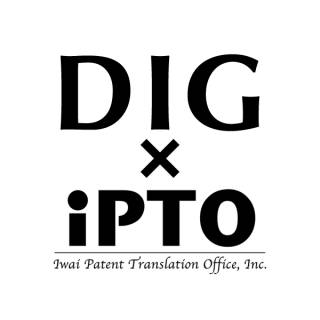 -----
DIG is the name given to the project that disseminates information to the world about the uniqueness of different local communities.

DIG is quality media that digs in deeper to get a closer look at different local communities.

Our translation department is currently posting English translations of popular articles on DIG on a trial basis.
(with the cooperation of Iwai Patent Translation Office, Inc.)
続きを読む
Tweet